So about a month ago the hubs interviewed for a job back home.  But it’s still with Amazon just a different department so that’s freaking awesome!

Things are moving slow yet fast.  We need to get there the first week of July but the moving company is taking it’s sweet time.  So everything might get pushed into the second week of July.

We want to drive home to Texas instead of flying.  We plan on taking a vacation through California.  The boys want to see the beach.  What better place than there right?!  We want to go to the San Diego Zoo and try to fit Legoland in (SHHHHH! That’ll be a surprise).

I can’t wait for Texas.  Even though we’re moving 3 hours away from “home” it’s still a whole 30 hours closer!  So if your in the DFW area don’t worry…we’ll visit a lot!

When I get to Texas I plan on eating as much Mexican Food as I can handle.  Drink as many frozen sangria’s as I want.  And be in the sun a lot!!!  So if your looking for me check in a Mexican restaurant or by a pool. 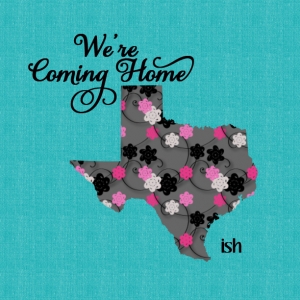 So we’ve all heard of the Mom intuition.  Long before you have that baby your told you’ll just know because your mom.  Well recently I knew my little one was getting sick.  But not real sick.  Just allergies.  I have terrible year round allergies.  So I kinda know these things.  Sure enough my son’s nose wouldn’t quit dripping/running and he felt miserable.  Not the normal snotty nose kid run…this is like a faucet.  Like mine.

Nothing stops it.  NOTHING!!  We can reduce our down time by taking NyQuil (during the day–not DayQuil), kleenex stuffed in the nose, and laying at a slight incline.  But no shot or allergy medicine will stop this.  It’s a nose curse i’m sure of it.

When you have this kind of drainage it literally beats you down.  It’s strange.  People don’t understand and for years when I was in the work field it was hard for my bosses to understand it.  About once a month my nose would do this.  If I stayed at work my production was low and it lasted for days unless I stayed home for 1 or 2 days.  I’d have to get up and wash my hands constantly, clean my desk of the tissues, and clean the tissue lint off everything.  It was horrible.  Oh and I took daily allergy meds…even tried shots.  This drainage makes you feel like you have the flu.  So imagine once a month feeling like you have the flu.  Everything aches, your not hungry, your going through boxes and boxes of tissues (remember this is only a day or two i’m talking about here…not a week!), your sneezing, coughing from the drainage in your throat, and your nose becomes raw and red.  So it’s much easier to reduce those symptoms by staying home propped up, on NyQuil, with kleenex sticking outta your nose.

So when my youngest sons nose started dripping the other day I knew what was coming.  I made him stay home from school…on pajama day!!!  He was sorta cool with it cause I made grilled cheese sandwiches for lunch.  He stayed propped up on the couch, on Children’s NyQuil, Claritin, and yes he had his own little trash bag and a box of kleenex.  By 3pm that day he was feeling much better!  And he went to school the next day.

So here’s what made me want to write this post.  The day he got sick I was tired.  I’m talking about T I R E D!!  For about a week I was going to bed by like 2am, getting up at 6:30am, but not even sleeping all night (hubs has sleep apnea…his machine has been keeping me up a lot lately), and being busy all day.  So I was sooooooo tired that I was dizzy and nauseous.  When my son kept sniffing snot back into his nose I had was literally so frustrated I said come here and let me help you blow it.  As soon as he blowed the tissue felt like water had hit it.  Then it happened.  I jumped up and kicked into gear.  My tiredness completely went away.  I was in Mom Mode.  I was explaining it to my husband and he said it’s that Super Mom thing ya know.  I’m like I guess.  He’s like no really…..there’s something that Mom’s can do when you have to.  I was kinda like hmmmm, guess so.  So there ya go.  It’s true…Mom’s have killer intuition and superpowers.

So the second I heard that Red Velvet Oreo’s were coming out I made sure we got a package.  And OMG yes they’re good. 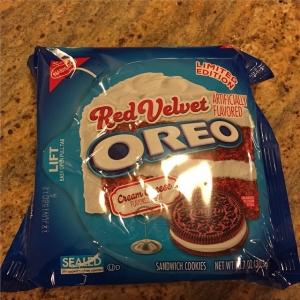 Then there was the 100th day of school.  I wanted to make the kids a shirt but only Jayson wanted one.  Kennyth’s getting a little too old for it but I still gave him the option.  Jayson loved his shirt!  This is just printable iron on.  Not the best but it worked in a pinch. 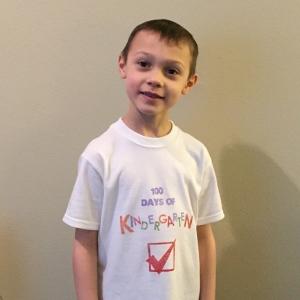 Time for Valentine’s Day!!!  Jayson doesn’t like much candy.  So I saw a similar idea to these oranges and I showed him and he wanted.  I think they turned out great! 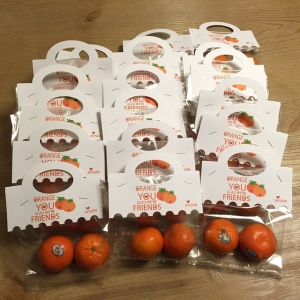 Kennyth wanted Fun Dip so I had to think of a way to use my Silhouette Cameo for this one. I think they turned out great! 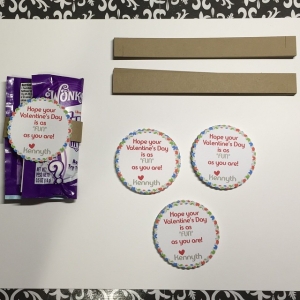 My first HTV project!!!  Kennyth is learning to play the recorder and I wanted to personalize his bag so he’d know which was his.  I like it.  I immediately fell in love with HTV and placed an order for more a few days later. 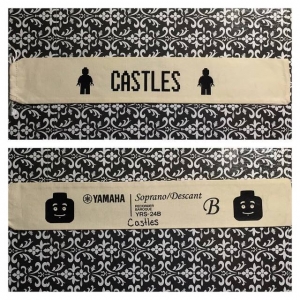 See….got my HTV and made shirts!

I really love how they turned out! 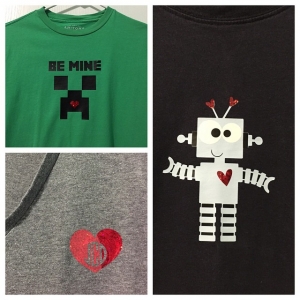 Sweets for my sweets!!  Of course I used the Silhouette Cameo!!! 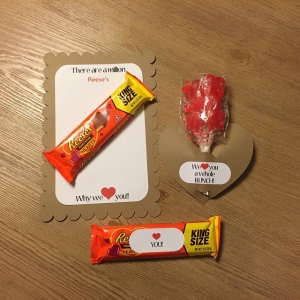 My sweetie took the dog to get groomed on Valentine’s Day (big gift for me…I’m simple).  And he brought my favorite flowers home!!  So sweet!! 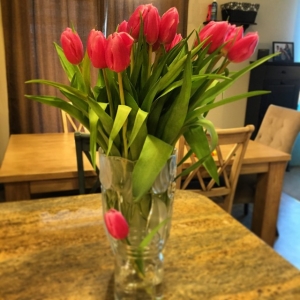 Our Valentine’s Day brunch.  This was suppose to be for breakfast but when you don’t have a griddle anymore and you forgot that detail yet you still promised red velvet heart pancakes for Vday you still do it.  In a skillet.  One at a friggin time.  I had to warm the oven up and put the pancakes that were made on it to keep them warm.  It worked btw….but I don’t recommend it unless you need to do it. 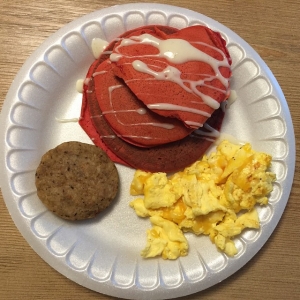 Next up was Kennyth’s science fair.  OMG I hate these things.  He did everything but use my Silhouette Cameo machine to cut things out.  It turned out pretty awesome! 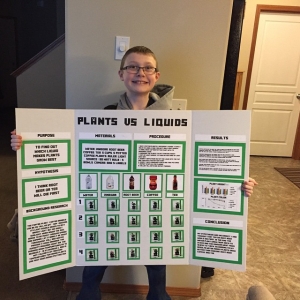 We decided to paint my office!!!  Well….I actually wanted to paint it and begged the hubs.  He said yes…even to the color I wanted.  WHAT!!!  Yes, and it’s awesome!

Took it from a hunter green to an awesome minty color!  Having a lighter color in the room totally makes it easier to work in there. 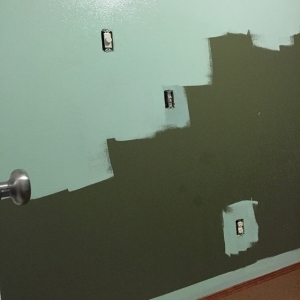 Then my stepson decided to move back to Texas.  So we made his room into a guest/office for the hubs.

Then we made the upstairs game room into a large Lego Playroom!!  We spent WAY too much money and time at Ikea!!!  But the turn out was great!  I’ll have another post and better pics soon on the Lego Playroom.

And that’s it for January.  Not a real eventful month….we were definitely happy about that!

So we did the Black Friday shopping this year.  It was fun and we over bought.  But we both worked extra this year to give big!  We gave about $100 worth of gifts to Toys for Tots too.

So this was our tree 3 days after Thanksgiving.  Lol!! 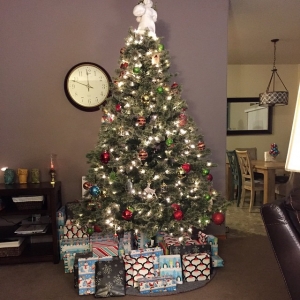 Our lil elves!!  I love the jammies!  They’re from Target! 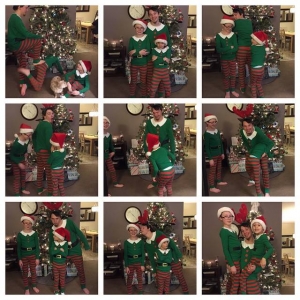 Our tree Christmas eve!!  This is before Santa came!!! 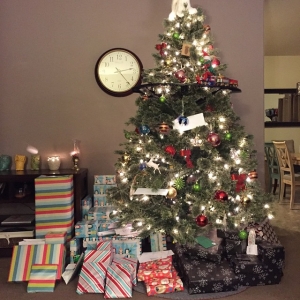 And this kid nearly exploded!!!  He’s wanted this for years and we finally decided to bite the bullet and do it. 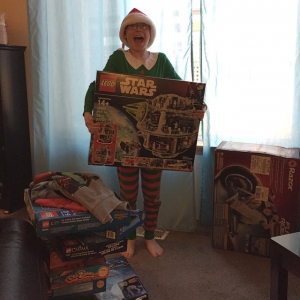 The kids had a breakfast picnic upstairs. 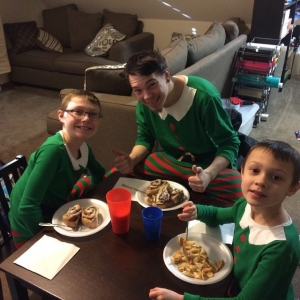 We had a pretty good Christmas and hope you did too!!

Not much went on these 2 months.

My son Kennyth that has Crohn’s started a new therapy since the medicine they had him on wasn’t working.  He wasn’t a fan of the new meds but we’re glad he chose to go with it.  He’s getting IV therapy every 2 weeks for a few months then it will be every few months. 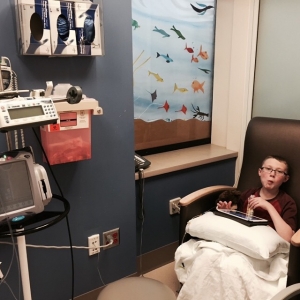 Then it was Halloween, getting my Etsy shop together for a big season, and of course Thanksgiving.  Here are some pics.

I don’t remember what Derryk’s costume was called but Kennyth was a ninja (big surprise, lol) and Jayson was his first superhero, Ironman.  I was a little sad about that too.  Does it mean no more cute costumes?! 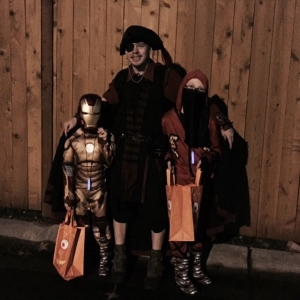 Here are some of the new ornaments I made this season. 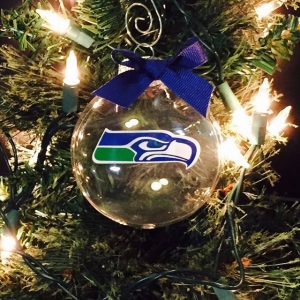 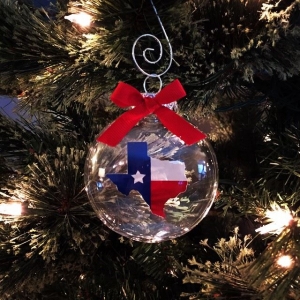 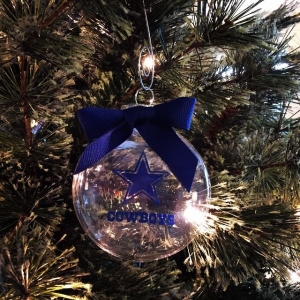 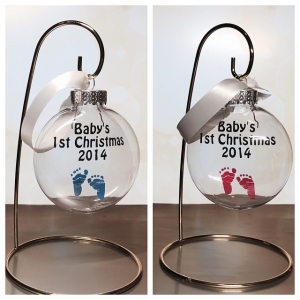 And then here’s Thanksgiving!!!  I made my crockpot turkey breast.  Other than the 6 hours the turkey took it only took me 1 hour to make Thanksgiving lunch!  Pretty awesome!! 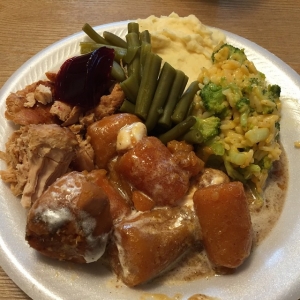