Why I decided to stay at home 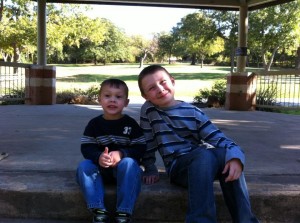 I’ve done the work in office thing for many years (health insurance) and when my son Jayson was born I quickly decided to stay at home….daycare for 2 lil ones was very expensive.  Little did we know that I would need to stay home with the kids.  We noticed that Jayson was having some developmental delays around a year old.  We thought it was because I stayed home with him and we didn’t get out much.  I joined playgroups and tried to get out more and nothing seemed to help, he would just separate himself from the group.  That’s when I decided to go back to work.  But not just any work…I wanted to work in daycare (did that several times and LOVED it).  Mostly because he could be there with me and I could see his development and bonus a discount so it wasn’t going to cost as much.  But he wasn’t developing much.  I made that dreaded call to Early Childhood Intervention (ECI) and boy was that one of THE BEST things I could have ever done!  Most of his therapy took place at daycare and we started seeing an improvement right away.  The bad part was he was only accepted to the age of 3.  He was already 2!  But then more great news came….there was a school…free of charge in the ISD we live in that he could attend…if he qualified.  Then worry hit again…would he qualify?!  That day came and he did qualify.  According to the tests and forms we had to fill out is when we finally had conformation that yes…Jayson is Autistic.  So we now start our new way of life….our new journey..