I have finally finished my spring decor! 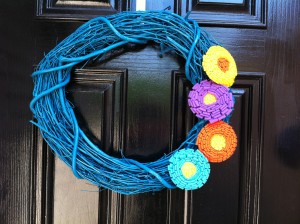 I spray painted a grapevine wreath that lagoon color (LOVE!) and then I let it sit on my door naked for a week, lol!!

I then finally got around to making my flowers.  Which really means I made a trip to Hobby Lobby.  Made the flowers (tutorial soon!) and then my wreath was wet from rain….had to wait, ugh!  Finally it was time to make it and I love it!  It’s springy and summery!  I might change some of the colors but I love it so much I might keep it up until fall. 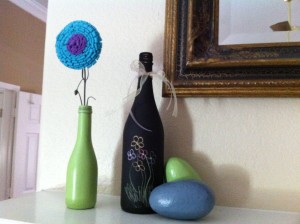 I’ve shown this pic in another post but I added this vibrant flower.  It’s my favorite by far!  I’m really loving this teal color!

So there’s my spring decor.  Simple, bright, and pastely (I know that’s not a word).. 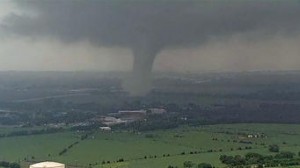 Well….we had a very rocky start to Spring here in North Texas.  April 3, 2012 will go down in History for us Texans.

We had expected rain and possible hail over night the night before the 3rd.  Woke up and nothing….no rain, no hail, nothing!  I took the littlest kid to school at 8 and picked him up at 11.  It was mostly cloudy but we still had plenty of sun.  I get home and since I wasn’t feeling well I took advantage of our brand new furniture (got it 2 days before that day).  Since the rain was coming my allergies went CRAZY!  So we were laying down and the weather radio goes off….warning about severe thunderstorms, no biggie–car’s in the garage.  Laid back down with my comfy blankie and a few minutes later it goes off again!  SERIOUSLY!!  We have the weather radio by the bed because that’s the best place for it while we sleep.  It’ll wake us up and not the kids (don’t worry….because we can wake the kids if necessary).

So after it going off multiple times I decided I wasn’t going to be able to rest and I turned the news on.  All of a sudden there were tornado’s like crazy!!  And I mean like crazy!!  As of April 10, 2012 there have been 17 tornado’s confirmed. 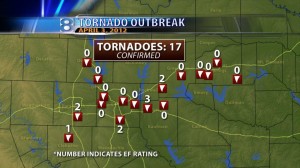 The most amazing thing is this video….you can actually see 18 wheelers being tossed in the air!!!

My entire family (even hubbs side) and most of my friends were were every tornado hit.  We only had to take cover once but I’m so glad we weren’t affected personally by this tragedy.  The one thing I wasn’t sure of was should I get my son from school.  I wound up leaving him there.  After hearing this woman’s story about her split second decision I now know that I made the right choice by leaving him there.  Growing up in Texas my Momma always told me that you were safer inside a place than out.  If your out find a ditch.  These are the things we have to think about growing up in Tornado Alley.  I left him there knowing they’d do their best taking care of my baby.

My heart goes out to each person affected.

I have FINALLY got my chore charts on the wall!!  I got the chore chart from Leah Remillet Photography and the potty chart from The Scrap Shoppe Blog.  I LOVE them! 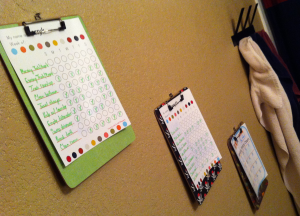 Mine went through several modifications though.  Don’t worry, I’m going to give you all the details!

First of all I printed the charts from the website I found and had them laminated at a local teacher store so I could use a dry erase marker on them (soooo cheap, 49¢!!).  I got the clipboards at Dollar Tree for $1 each!  Scrapbook paper from Hobby Lobby.  I chose paper the boys would like.   They were on sale at 40% off when I got them, so 29¢ each!  I already had mod podge so bam, I was ready!  I did my best to make the paper fit (not that easy i tell ya!).  There are imperfections….SHHH!!  So I cut, mod podged and voila!  I thought they looked great!

So I cut them down…they are NOT straight, don’t judge!  I put the chart in, glass behind it and kept the cardboard in there too.  I wanted them snug.  So I put them up….then oops!  The frames I bought had the stand on it…no biggie I’ll remove it.  Then I dropped one…on the tile and broke the frame (not the glass…the actual wood frame!)!!  DANGIT!!!  In all the frame craziness I bought wet erase dry erase markers–they had the fine point I needed.  Well the steam from the oldest boys shower resulted in a complete mess.  So nix that idea too….I used regular dry erase markers and it worked.  Now I just need to find a super fine point tip set and I’ll be ready to go!

So we’ve tried and tried to come up with other ways to do it….hubbs just didn’t like any of my idea’s.  So I took back the clip boards from the kids (I wound up giving them to the kids because what was I going to do with it…they can surely use it to draw on).  So now my papers are shorter than I wanted but they’re up!  Eventually I’ll re-print and re-laminate but for now they’re ok. 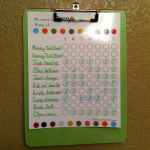 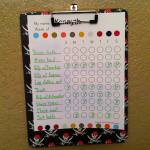 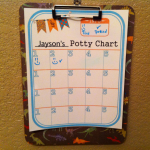 Well I decided to go with Spring.  Since it is Spring after all…sorta.  I had bought paper mache eggs from Hobby Lobby last month (about 68¢ each).  I had also bought some cute Springy scrapbook paper to mod podge onto the eggs.  But that did NOT happen!  Do you know how hard it is to put paper on an egg!  HARD!!  So I spray painted the suckers and I’m happy with the outcome.  Then I used the paper for my frame.  I think it’s cute! 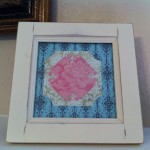 My favorite is yet again my chalkboard vase (aka wine bottle).  I love how I can change it so easily and it looks great!  I’m still not quite done with my other vase but I plan on making a flower….just gotta practice and get it done.  And yes I drew the flowers on the vase…it’s the ONLY thing I can draw, lol!!  Next to the vase are the paper mache eggs I spray painted.  I just chose pale colors we had in our stash of spray paint in the garage. 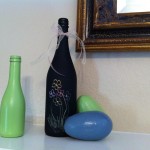 I’m still working on my wreath….but it will be finished soon!.