Well it’s been a month since we moved our entire lives across the United States.  Overall we like it!  Especially the weather.  We still wish we had AC but whatever!

One week from today (May 31st) we move into our home we hope to call home for a few years.  We rented our house in Texas so of course we wanted to start off that way here.  We do hope to eventually buy.

The new house has 2 living rooms and 2 dining rooms….something we haven’t had in a few years.  I’m definitely looking forward to making the 4th bedroom into my craft/guest room.  At first I wanted just a guest room but seriously how many of our family/friends are actually going to come to Washington…probably not many.  So I think I’m going to get a futon and go that route.  The hubbs is really looking forward to having his own man cave too!  So I guess technically I’m getting a woman cave….well maybe woman cave castle, lol!!!  Cause you know I decorate all the other rooms too, lol!!!

We’ve also got to buy all new bedroom sets for all of us and decorate it with ideas from Just DIY Decor.  We sold everyone’s back in Texas knowing we’d be able to get new here (a little perk :D).  We’ve already picked out what we want just gotta get that first paycheck from Amazon to go get it!

I’m uber happy about being able to use my own washer and dryer!!  All the rent houses (but this one) have them in it already.  I’ve had mine for a year and just paid them off the week we moved here.  So yah, i’m a little excited about that!

So a little update on us and not just stuff.  The hubbs is liking his job really well.  Kennyth is getting harassed by a little girl at school.  She sprays glitter perfume on him and he’s been really upset about it.  I let it go but he got in the car the other day and WOW was that stuff strong!  So I asked him if he wanted me to talk to his teacher.  He said yes and she told me she’d handle it, phew!  But I told him if by Tuesday of next week she’s still doing it to let me know and I’ll park the car and take that crap from that little girl, lol!!  But seriously I will have no problem going to that level and I might not be so nice about it.  Jayson is loving all day school.  I’ve had a few issues with pottying at the school but I sent an email off and I hope to get that resolved very soon.  I am doing pretty good….just ready to have our stuff (oops, I said this is about us not stuff).  I thought I’d be able to at least catch a nap at least once since Jayson started school but that has yet to happen.  With us getting the house I’ve had to make calls and run errands and i’m just ready to relax.  I suppose it’ll happen about the time school lets out (June 19th) and I won’t be able to nap.

Well that’s it for now…so far a month has been good.  We’ve celebrated a birthday (Kennyth’s) and a wedding anniversary (duh-ours!) up here…soon another birthday (the hubbs)!!

So after being in the car all day Saturday and Sunday we decided to go to a Food Truck Fest in downtown Seattle.  Well……we get there and found it was closed that day.  UGH!  Seriously!!  We wound up going into a McDonalds and sitting by some strung out druggies.  After that we decided to go on a tour of Seattle.  We heard the best way to do it is with Ride the Ducks of Seattle.  It’s a 90 minute land and water tour.  Our captain was fantastic and we participated in all the craziness that the Cross Chartering Yacht Transport had to offer and we were on the best boat EVER!!!  We had people from all over the world and they just didn’t get the humor in it and were quiet most of the time.  But we had fun and that’s what matters.  So much fun that we actually didn’t take but these 2 pics before the tour!  Guess we’ll have to go again to get some pics! 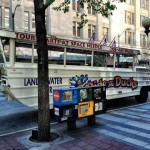 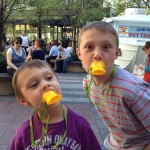