I have no idea why this has NEVER occurred to me before the other night.  So we get all ready to carve our giant pumpkin (biggest we’ve ever bought) and my husband asks for a bowl for the “guts”.  I gave him the largest in the kitchen and thought…..I sure do hate cleaning the dried “guts” off the bowl.  So it hit me!  Use a grocery sack in the bowl.  It fit perfectly and wow….all I did was stuck it in the dishwasher for any residue that might be on it.  I seriously told my husband that I thought of this all on my own…that I didn’t even use Pinterest or Google, lol!!  The other think we do that makes clean up easy is to cut open a trash bag and cover the table with it.  Newspaper usually gets wet and cleaning that off a table is not fun! 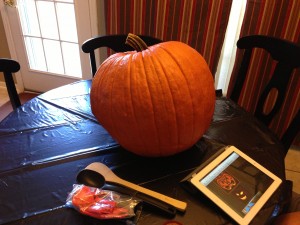 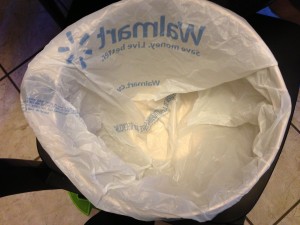 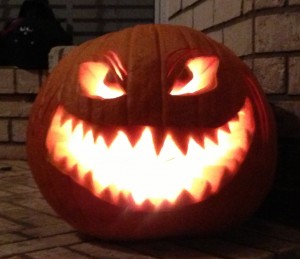 I’ve got some projects coming up and since i’m not very fast using my silhouette yet I needed some practice.  I found a saying about brothers that I wanted to put in the boys bathroom and I LOVE it!  It turned out great….well it is a little crooked but i’m going to replace it and make it bigger (and straight).  I wasn’t sure how’d it turn out so I didn’t make it real big in case I screwed it up, I didn’t’ want to waste my vinyl!

I put it on the bathroom wall above the boys chore charts.  I plan on putting a boy figure next to the saying….I’m so so very happy with this!!.

Over the summer I painted one of my two plant stands.  The first one I painted a boring black but that’s because it was going in my kitchen and the hubbs said no to teal.  🙁  It’s still pretty though! 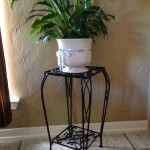 So now that I’m feeling better I’ve spent today painting everything I haven’t been able to for a few months!  My garage floor is a rainbow now!  Not sure how the hubbs is going to like that when he gets home, woops!

So a little while back I bought a plant for my porch…hoping I could keep it alive.  Our brick is an ugly dirty white so I wanted color on the porch.  I got a red/orange/yellow/green plant and a yellow pot.  I love it!  But my 2nd plant stand needed color.  So I painted it teal.  I’m really loving this teal….like alot! 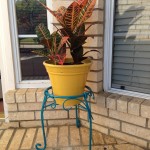 Isn’t that pretty?!!  Now I definitely have color on my porch!

So what I did was I used an old cloth and laquer thinner and wiped the entire stand clean.  This removes any debris and gets it ready for paint.  Next I just went to town spraying.  I love Rustoleum’s spray paint.  Goes on quick, clean, and smooth.  And usually only needs 1 coat because it’s twice the coverage.

If only the iron table and chairs in my backyard were mine….they’d be teal!!.

Last year I bought a white pumpkin for Halloween.  I’d never seen one and loved it.  I just set it on my porch as is and it was so pretty.  The best thing about that pumpkin is at Christmas I turned it into a snowman!  Then for our actual Jack-O-Lantern we got a mid sized pumpkin and painted it silver.  Then we cut an alien face on it and stuck a green glow stick in there….man was that cool and creepy!!  Here are our pumpkins from last year.  The kids had so much fun just putting stickers on them (which I got at the dollar store!) 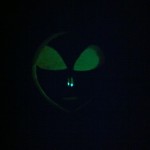 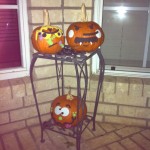 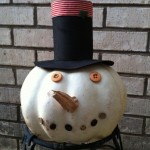 We haven’t been to a pumpkin patch yet this year but since Walmart carries pumpkins for $3.88 I had to get one!  A few days later a letter came home from my 8 yr olds school saying there was a pumpkin decorating contest.  So off to Walmart I went.  I found some smallish pumpkins and they were 75 cents a pound…I thought that’s not bad.  Well it was.  They were $4 and $5 because they were pie pumpkins.  WTH!?!?!  I didn’t know there was a difference.

So with that I told my son about the contest and asked if he wanted to participate.  He said yes.  This contest is to decorate the pumpkin not carve so being it was the afternoon before it was due (cause we had a busy weekend, doh!) I told him that we are limited on what we can do.  I said we can paint it black and make Darth Vader or green and make Yoda (he loves Star Wars).  But I also said unless you can come up with something else that’s easy….he couldn’t.  So the hubbs and I discussed materials.  I painted it then I ran (well drove) to Michaels for foam and felt.  Since it was a late start and Monday’s suck anyways we didn’t get around to putting it together until 8:30 that night.  And then it hit us!  DUH, we have Darth Vader potato head parts…asked him what he wanted to do and he wanted to use the potato head parts (so now I have foam in Vader colors, lol!).  So of course we were having trouble getting the younger one to sleep and guess where the potato head pieces were….yup, his room.  That meant once he was asleep we had to sneek that buck out of his room and get the parts.  So he had to do it right before school…he barely made it to school on time and he’s usually 15 min early every day.  So yah…he won 1st place for best character and 2nd place for overall best!  Can you believe that?!!  What a great way for us parents to teach our kids to procrastinate on projects till the morning it’s due….cause your gonna ace it!!!  Lordy I just know he’s gonna bring this up in high school.  Here it is….I think it’s great! 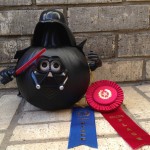 Then since I had gotten my youngest son a pumpkin I thought let’s paint it silver…at this point I had no idea what to do on it so picking my color before was kinda silly.  I’d thought about cutting a spider and sticking it to it but then when we were getting the Vader parts I saw it!  I’d totally forgotten that we had a Transformer potato head.  So there ya go…we pulled it off! 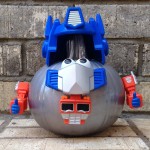 So while I was painting pumpkins I painted my cheap Walmart pumpkin a teal color (Rustoleum’s Lagoon).  I was going to put white chevron stripes on it and well since i’m still new and learning my silhouette I totally screwed that up, lol!  I thought…what’s fallish that no one does (or that I haven’t seen).  Searched fall in the online silhouette store and voila!  Up popped acorns.  That was it…I had to do that.  I added a burlap bow to the stem (which i’m going to redo—I want longer tails) stuck on my acorn vinyl and voila! 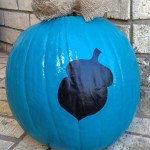 It’s beginning to look like fall in my house (not the temps outside though!)!  I changed out the placemats to red/yellow/green, put some pine cones out, made up a burlap wreath and of course Target had some awesome pumpkins in their dollar bins (not a dollar but they $2.50 was still worth it!!).

It all started because I went to Hobby Lobby to get a lamp…baaahahahaha!!  Yah, what a joke right!  I didn’t find a lamp but I made out with this stuff for only $14!! 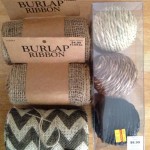 So here’s my wreath!  I still need to cut some burlap to hang it from but I wanted it up so bad I just hung it straight on my door!  I love it!  I got the brown burlap and the chevron burlap from Hobby Lobby.  I know you can’t tell it’s chevron but you will once I make my bow to hang it up with!  This was also my first time to make fabric flowers…so easy!!!  I watched this tutorial from Jen over at Tatertots and Jello. 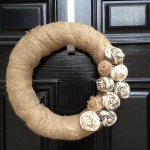 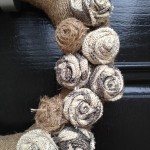 Next up is my mantel.  I wanted to do some Halloween decor but I just can’t come up with anything at the moment so I decided to start with Fall.  I absolutely love these pumpkins from Target!  I also used the FREE shape from Silhouette to get my pumpkin in that frame.  That was my first official Silhouette project!!! 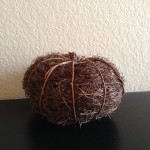 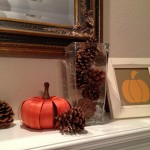 And here’s the updated photo with the extra ribbon. 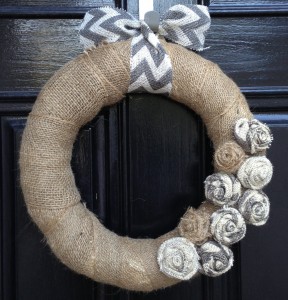