So I’ve been cooking for many many years.  I’ve accumulated so many things that aren’t necessarily necessary but when you’ve used them for YEARS you can’t imagine life with out them.  Well that’s where I’m at right this very minute!!  Along with many other things you don’t think about needing until you do.

As you know I recently moved to Washington state for my husbands job (Amazon!!).  We are currently staying in corporate housing which is really a furnished apartment.  Sounds cool but yah…it’s just a place to live until you find your house in oh about 30-40 days so it  just has the necessary things you’ll need to survive…well basically.

So let’s start with the kitchen.  I have 1 of each of these- serving spoon, slotted spoon, ladle, & a spatula.  Seems fine unless you know how many of those I have and use on a day to day basis.  I have at least 3-4 of each of those!!  So I’m washing dishes at least 2 times a day.  Which isn’t a big deal except our hot water literally trickles out of the faucet!  And I can’t bring myself to run the dishwasher with 3 cups and serving spoons in it.  We do have 8 place settings of dishes and silverware…but yet again we go through so many forks in a day it’s ridiculous!  I miss the prep bowls too…I use them for sauces etc not really to prep what i’m cooking but it’s the little things you don’t think about.  Muffin tins….yah, those too.  Measuring spoons….had to pick a set of those up as well…ugh!

The bathrooms….oh the bathrooms!  Forget my luxurious soft plush microfiber bath mats….we have towels for rugs right now.  The ONLY nice thing about them is if the little kiddo pee’s on them it’s easy to toss in the wash (I’ve had to do that a few times already!).  The other thing is storage for the bathroom.  The counter around the sink is literally 2 inches bigger than the sink!  Totally weird for us.  But it’s not long term and I hit the Dollar Tree for some storage solutions and voila we’ll be ok!  Because of the hot water trickle issue it takes about 15 minutes to fill up the bath tub for the little kiddo….it’s annoying!

The laundry room.  Well I’m definitely not use to older machines anymore, lol!  They’re fine but when you open the dryer lint literally flys out at you!  The lint trap sucks big time.  And because of the hot water trickling issue it’s nearly impossible to wash anything on hot.  And since everything is packed I didn’t think about laundry baskets or hampers.  So off to Big Lots we went, problem solved…now i’ll have double, lol!

Can you tell I’m really irritated about the hot water trickle?!!  You can’t do more than 1 water related thing at the same time in this apartment so that’s really really irritating!  But I just gotta keep thinking…..1 month….1 month!!

The only other thing that’s irritating is the no a/c but I covered that in another post….so I guess what I’m saying is I won’t bore you there..

Things I miss from Texas and a bit more

I know some of you are like it’s in the 50’s why on earth do you need A/C?!!  Well when you get moving around in an apartment it gets hot and muggy quick!  I’ve opened the windows/doors and since the wind doesn’t really blow into our apartment it takes forever to cool off!  The heat pretty much runs once a day in the house….cause it heats it up for an entire day!  Luckily we’re only here for a month and I hope I can deal with it that long….it’s only getting warmer outside so I dunno.

Oh the bread!  The soft Mrs. Baird’s bread back home…oh how I miss the!  Being near Fort Worth where the softest bread around was made and delivered daily to your local supermarkets is something you don’t think about missing.

Big Walmarts are not really around here.  We saw 2 super Walmart’s this past week when we were out exploring but they’re so far away it’s crazy….like hours!!  We do have a Neighborhood Walmart about a mile from the house and they have a little more stuff than a Neighborhood Walmart in Texas.  Fred Meyer (Kroger) is big here as well as Safeway….so we’ll see how they all compare eventually.

For the most part things are as normal as normal gets for us.  I’m not buying many spices because all mine are in storage and I don’t want to buy them only to have double in our house here in a month.  So for dinners I’m having to make easy stuff that doesn’t require spices to add.  It’s weird and surprisingly hard to come up with dinner ideas (so if you have any ideas PLEASE let me know!)!

A lot of people keep asking about my allergies.  In Texas I suffer from allergies year round.  I don’t expect that to be the case here.  I’m having a few issues but nothing like what I’m use to.  So i’m very grateful for that!  I’ve been out in flower fields, forests, the city, etc and even though i’m on my medicine I’m not really having many issues.  What a nice change that is!!

After we got the kiddo from school we decided to drive into the mountains to see the snow.  It was only an hour drive and man was it worth it!  I can not wait until winter….The Castles will be learning to ski that’s for sure!  The Snoqualmie Falls were very pretty too! 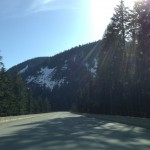 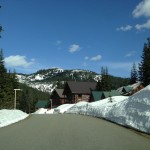 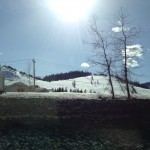 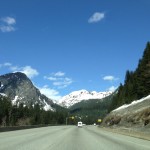 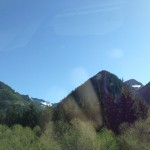 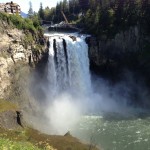 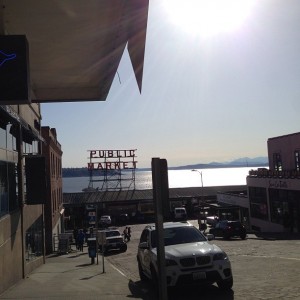