It came and went so fast.  We celebrated our 9th wedding anniversary on May 24th!  Well we actually had our “dinner” the night before so the older kiddo could watch the other kiddo’s since he had that day off work.

We were given an Outback Steakhouse gift card so yah….we went there!  We both had the new york stip steak, garlic mashed potatoes and a salad!   And we had to get the bloomin onion and scarf as much bread as possible!  We were so full from our meal we decided to get dessert to go.  He got cheesecake and I got key lime pie….they don’t really have a selection so i settled on something i’d have a bite of and pass it on to the hubbs.  Which is what happened 2 days later!

On our actual anniversary the hubbs came into the bedroom after I woke up and he had 2 glasses of what looked like champagne or white wine.  It was red bull!  We’re funny like that…..who has a red bull toast?! 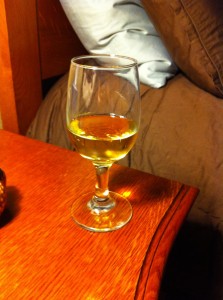 Since we celebrated our anniversary with a nice dinner the night before I knew we weren’t going to do anything the rest of the day so I decided to make a nice dinner and his favorite dessert! 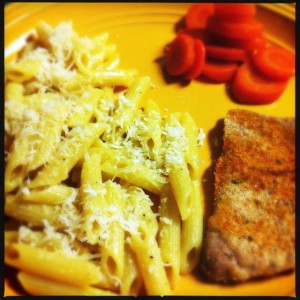 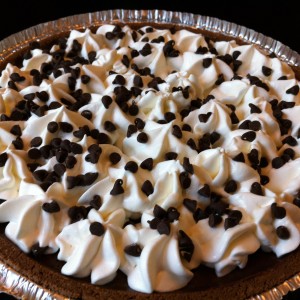 In preparing this dinner I knew I wanted to make something good and we’ve had a lot of chicken lately so I went with pork chops.  I wanted to do shake n bake but kroger was out of the generic and I just couldn’t/wouldn’t pay for the name brand there…yeesh it was expensive.  So I went with seasoned bread crumbs and seasoning salt….yah, I should have paid for the brand.  Then I wanted a buttered noodle and I had some leftover parmesan so I added that to the noodles.  OMG best thing ever!!!  It’s definitely going to be a new favorite around here.  Then I chose regular ole canned carrots and added salt, pepper, and butter.  Easy yummy satisfying dinner!

The chocolate pie is just a regular ole jello pudding chocolate pie.  I just put my cool whip in a pastry bag and piped it on top and added mini choco chips.  The hubbs favorite crust is the shortbread but kroger was out of it too!  So I went with a chocolate crust since we both don’t really care for a graham cracker crust.

Happy Anniversary dear!  Let’s have MANY more!!  Love you!. 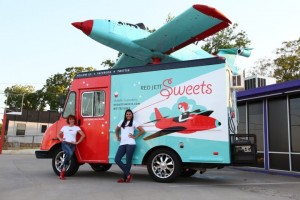 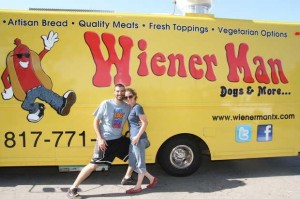 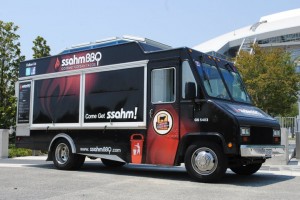 Food trucks are popping up EVERYWHERE!  I found out about them through Red Jett Sweets.  And I found out about RJS back in September 2011 from a blog I frequent Cupcakes Take The Cake.  They live in New York so when I saw that they visited a mobile cupcakery in the Dallas/Fort Worth area I about flipped!  I had to go.  So after convincing my husband who thought it was weird we finally went!

Somehow I was so wrapped up in the adventure of a cupcake out of a truck I didn’t get 1 single picture!  I’ve been back multiple times too and I still haven’t captured 1 single stinkin picture.

When I found out there were several other food trucks I was wowed!  Now there are tons that I know of but I haven’t been able to taste more than a couple of the trucks.  Luckily there are a few food truck parks that have opened up around us and I’m always trying to find a way to get there.  Now that my husband has tried a few he’s a food truck lover too!

I find out about the food trucks through DFW Food Truck Foodie.  The Fort Worth Food Park was the first in Fort Worth to open.  Then this past Thursday the Cowtown Chow Down food park opened up.  In July a food park will open up less than 3 minutes away from my house!!!   I’m so excited for the Keller Food Park to open up!! 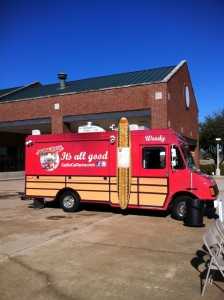 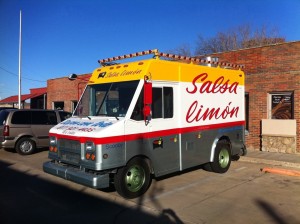 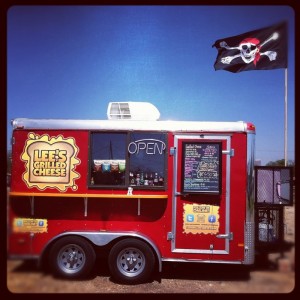 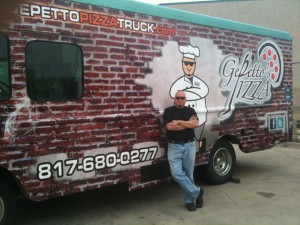 Here’s a few of our favorite food trucks. 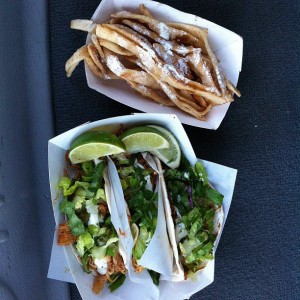 I can NOT wait to try several more since they’ll be so close to home!.

THE BEST Ninja Birthday Party Ever!

Well…I dunno if it was the best but it sure was for me and everyone that came!  Here’s a snapshot of the items we made. 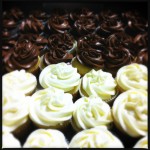 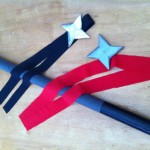 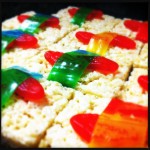 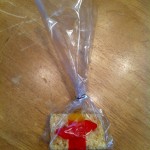 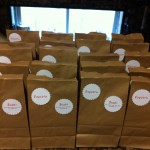 The cupcakes are not in the ninja colors my son wanted….but it’s so hard to get red frosting!!  So if he wanted frosted cupcakes he was getting what I made, lol!

I did make the white buttercream frosting but I had a little trouble with the chocolate frosting this time.  Which is weird since I’ve made it before with no problem.  But this time it was so gritty.  I tried all the tips online that I could find on how to reduce or fix the problem but nothing worked.  I eventually had to toss it.  I think I know what the problem was…..I started out using one brand of powdered sugar and finished with another.  It was the Target brand powdered sugar….even in the bag is was so gritty.  I tossed it too!  So at 11 o’clock at night I wound up doing what I thought was best….canned frosting!!  I know I know!!  But I had everything on such a tight schedule that I didn’t have time to mess around with it and well…it was for a kids party…not like they really care.  It was frosted and yummy!  Sure I could have started over but I had already tossed a batch of red buttercream…that looked more mauve and speckley than the elmo red I was going for.

Each kiddo got to take home a sword, headband, sushi, and popcorn (and some snuck home the ninja stars–that’s ok though).  They all loved it too! 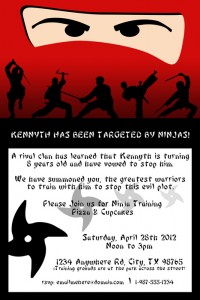 My hubbs designed the invite (I want to say i’m sorry for all my input but they turned out fantastic!).  Then we sent it to Walmart and had them printed….which I love because it’s WAY cheaper to do that way!  We spent under $7 on 35 invites!  But the real money was spent on the envelopes….$10 at Michaels!!  Still not bad (I used my 20% off coupon–get their app and become a rewards member to get their coupons).  We could have gone with plain white generic envelopes but this was a cool party that needed cool black envelopes.

The thank you card is being created now so I don’t have an image of that but it’s going to match the invite.

For weeks I’d looked online and got lots of good ideas for stuff to make for the party.  We wanted swords, chinese stars, the sushi snacks, pinata, chinese lanterns…the whole deal!  So we started planning. 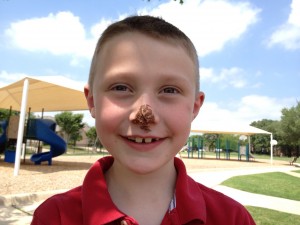 We had everything planned down to the minute…and of course that didn’t go down the way it was suppose to.  We let the kids play on the playground as they arrived until the pizza arrived.  It was suppose to be about 30 min of free play there..wound up being 45 minutes but I don’t think they really cared.  Once the pizza got there we ate lunch then cupcakes.  It was so windy out that I couldn’t even have a candle (or the decorations I’d bought–grrr, I had some cool chinese lanterns that I searched and searched for too) so I told my son to pretend to blow the candle out.  He took me seriously and as he leaned in he got a cupcake smooshed in his face…..total accident!!  Seriously it was!  I was thinking about doing it though.  After food we played some ole fashioned games! 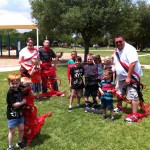 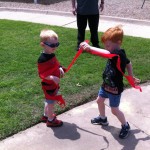 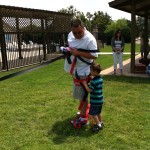 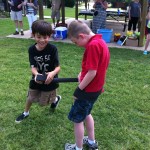 Our first game was Capture the Ninja.  We broke the kids into groups of 2 and gave them 2 rolls of crepe paper (dollar tree—2 for $1!!).  They had so much fun!  Then we made a game of picking up all the paper and throwing it away, lol!! 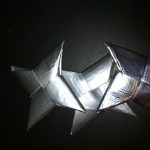 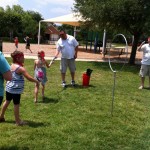 Our second game was the ninja star throw.  We found some stars we wanted to order on Amazon but we waited WAY too long to order them so I said I’m sure I can make them outta duct tape.  Turns out you can!  But I couldn’t….at first.  My stepson is a duct tape guru.  Seriously he is!  He made a duct tape suit once…yah, he’s awesome!  So I said here’s the duct tape and here are the instructions, show me.  Nope, still couldn’t understand it.  So he made me 4 (all the time we had that day before he had to go to work).  So while he was at work I tried and tried and tried.  And finally like they always say…practice makes perfect….I had done it!  I was a ninja…a true duct tape ninja star maker!  So I made 8 more!  Yah they’re awesome!  This is the tutorial we used.

To play the game we used a hula hoop we got at The Dollar Tree, duct taped it to a large wooden dowel and spray painted it all silver….oh and our grass in the front yard, lol.  So they stood a good distance and each kiddo had 3 turns to toss a star through the hoop.  But we were going to let them until they got it through.  Most got it through the first time so I’m guessing it wasn’t as hard of a game as we thought.  Once they got it through they completed ninja training and received their sword and were allowed to battle. 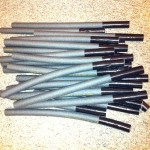 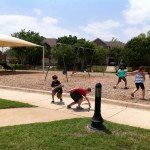 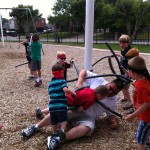 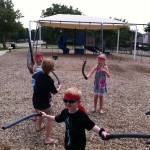 Our last game was the Ninja Battle.  We loved the paint stick idea for the swords (paint silver use duct tape for the handle) but when Home Depot was out of paint sticks (we even offered to pay for them hoping they’d find a stash, lol) we decided to go another route.  We bought eight 8 foot foam pipe covers and cut down to sword size.  Each made 3.  Then I took black duct tape and wrapped 3 pieces around one end to make a handle.  We really liked it in the end because they are much safer and the kids could actually use them at the party rather than a wooden sword no one would let them use…ever!

The sushi was very fun and easy!  Everyone loved it.  I got the tutorial here.  Seriously so easy.  My concern was how the fruit rollup was going to stick to itself but it’s pretty sticky and it stuck to itself with no problem.  I actually made them the day before and tied them in lil bags.  I was worried they’d dry out so I didn’t use the twist tie show above, I changed it after the pic.  I used regular ole gift wrap ribbon and tied them real tight.  We had no issues with them being dry.  I actually ate one several days after the party and they were still super yummy!

I really loved this party!  It was so much fun!  All the kids and adults really enjoyed themselves….even ole Aunt Kim…I won’t post the pic unless she tells me I can but she’s one awesome ninja aunt!