You know that gut feeling something is wrong but the doctors keep telling you something different yet you just know it’s not right.  Well that’s what has happened to us.  Our 9 yr old Kennyth has had one heck of a bad month!  He started telling us about some stomach pains he was having and just like every normal parent we would ask when was the last time you pooped.  He’d tell us last night…or a few days ago.  So we’d say well you need to go and voila it seemed to work.

Fast forward a few weeks.  At the same time this was going on he was having ear ache after ear ache.  So after 2 months of treatment it was time for surgery.  A few days before surgery he was in so much pain from his stomach I made a doc appt to make sure he was ok and could go through the ear surgery in a few days.  The doc just said yah, he’s constipated and it could be nerves for the upcoming ear surgery.  Give him some extra fiber and miralax for few days to get things moving and voila….seemed to work.  So we went through all the ear surgery stuff and all of a sudden his stomach was back at it.

Fast forward a few more weeks and that’s where we’re at today.  We were talking about how he’s not getting any better at all and we want blood work done to test for diabetes, celiac disease, etc!  So the hubbs took him to our local hospital and they pretty much sent them straight to the Seattle Children’s hospital.  They start drawing blood, testing his urine, stool, etc. and they rule out a bunch of things so that was good.  But they did find out that he’s anemic.  Which totally explains his ghostly appearance!  They were kind of surprised his doctor didn’t check for that because of how pale and lethargic he was.  And they’re thinking he has Crohn’s Disease.  More testing over the next few days for that.

So…back to the go with your gut saying.  I’ve had this feeling that something was wrong with him for quite some time during this whole thing.  But because the docs weren’t worried we chalked his hurting up to him being lazy and not eating right etc.  Well at some point you just have to go with your gut.  Our insurance only covers emergencies if it’s an emergency.  Well our pediatric doctor has local offices all over our area and are open 7 days a week.  Therefore making the emergency thing a little hard.  So we waited until after hours to go to the ER and i’m so glad we did!!!  I wanted them to find something out but didn’t at the same time. 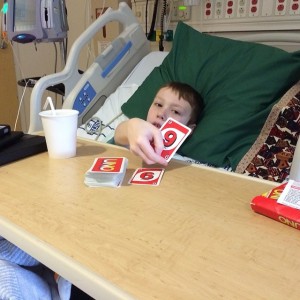