So I got this kitchen table off craigslist in March 2012.  I was going to paint it with in a week and well life just got in the way.  Once I put stuff on it and started working on projects I never did anything with it.

This weekend I decided to have the hubbs do a lot of odd things around the house (take Christmas lights down, fix gutter extensions, sweep driveway, etc).  Well I told him while he does all that I want to paint my craft table.  He said well i’ll sand it for you (since I have a bad left hand).  OK!  He took down the Christmas garland first because he didn’t want any of the sand dust getting all over them.  Then he sanded.  When I went to grab him a “Man Lunch” (Dickey’s BBQ) he painted it for me!!  I was in total shock and VERY VERY thankful that he did.

He honestly did a better job than I would have.  I’m cool with that cause I didn’t do it but I definitely wouldn’t have done that good of a job, lol.

So let’s talk about the color.  I wanted to use my favorite teal color I’ve used in the past (Rustoleum’s Satin Lagoon) but it’s been sooooo hard to find it.  Well today was my lucky day.  Home Depot had tons of it!

The top finish is not your normal finish.  I wanted something that I didn’t mind messing up….after all it’s a craft table.  I thought about painting the top black but then decided I’d get all mad the first time I got a drop of paint on it or mod podge, etc.  So I decided to mod podge scrapbook paper to the top.  It’s durable and can be messed up and not that noticeable   Perfect right?!!  Since this was a last minute project I hadn’t bought my paper and the paper I wanted to use was at Hobby Lobby….it’s Sunday, they’re closed!!!  So I take my chances and go to Michaels.  I didn’t find a close enough paper but decided on a black and white pattern.  Once I got it home and laid it next to the table I’m soooooo glad I went with this one.  The one I wanted at Hobby Lobby was way too blue so it wouldn’t have worked anyway (I had a few scraps from previous projects).

The materials you’ll need to do a table like this are listed below.

Overall I’m VERY VERY pleased with this project!  As you can see in this picture I now need to get some bookshelves/baskets and make my storage stuff look nicer–eek!! 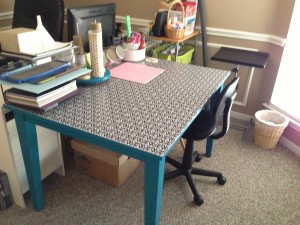 Well our new year started out rough!  We went to a great New Years Eve/Birthday Party and then that night the hubbs became sick and it set in fast!  We never go to parties on NYE but a good friend of ours had the party and we thought what the heck we’ll go.  We had to leave early cause lil Jayson was just exhausted.  By the time we got home my husband started feeling ill.  By morning he was down….and of course we figured it out easily that it had to be the flu.

Two days later lil Jayson started to complain of a stomach ache so I kept him home from school on his first day back just to be safe.  Good thing I did because he still hasn’t been back to school!  He should be good to go back on Friday though.

Then just one day after Jayson fell ill….Kennyth’s school called to tell me he had a fever and a bad cough.  His first day back to school will be tomorrow.

Then when you didn’t think it could get any worse I fell ill the same day Kennyth did (Jan 3rd).  I started feeling fine by Saturday mid-morning then by Saturday evening another wave got me.  I was down for the count again.  Monday I decided I should go to the doctor.  We decided about an hour after I’d done the web checkin at CareNow that we should have made an appt for everyone else so we did.

CareNow is awesome I tell ya!  I was called in about 2 hours before the rest of the family and not only was I able to get the rest of the family pulled in the room with me but I took having the awful task of the flu test taken from each and everyone else in my family that was sick.  Why that is….because I tested positive for Flu B.  And since we all had the same symptoms voila….they had the flu.

So now the 2nd weekend in January is coming up maybe just maybe we can get all this Christmas crap down and put away!!  I’d really like my house back to normal!

Oh!  And of course my new years resolution was to be on local tv with the flu….lol!!!  A local news station asked on facebook to email them if you had the flu.  I did and I was actually shocked when they said they wanted to come interview us.  Well ok then.  So here’s the 2 seconds of our fame..