How we talked about SEX with our 10 year old 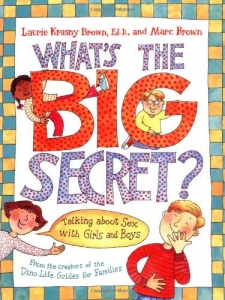 So it was time to have the talk with our middle son.  My husband had the talk with my stepson when he was 8 and I really felt we waited too long with our middle son (he’ll be 10 in 1 week!).  So I found a book at our public library that I thought would be good.  Well it wasn’t.  It was FANTASTIC!!!  It was a real quick read so I knew it wouldn’t be too much or not enough for our son.  We had our son read it then we discussed it.  We went page by page and asked him questions to see what he knew and answered questions.  I was really surprised at some of his guesses. Some were right on and some were well wow….way off.

If your looking to discuss sex with your kiddo whether you have a boy or a girl I believe this book is a great place to start.  I was really nervous and it went so well having something there in front of the both of you with the terms and pictures you needed to discuss it without looking like a goob.  And it’s so much better when you have confidence in front of your child.  If gives them the confidence to talk with you and not be nervous.