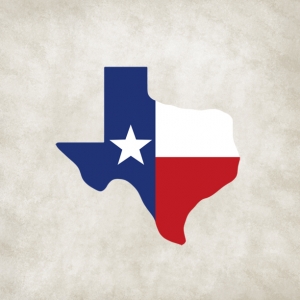 I believe it was the last day of school when we were finally told we’d be moving in one week.  In Washington state school didn’t end until June 19th.  The movers would be at our house on June 26th.  We’d already started to declutter but we didn’t think we’d decluttered enough.  on the go moving in bellevue company arrived at like 8:15 that Friday morning…..three guys.  They had almost everything packed by 5pm!!!!  The only things they didn’t pack was the bedding so we could sleep that night and the few bathroom things we weren’t letting them pack just yet (shower curtain and towels).  They weren’t bothered by it as it’s normal for them I suppose.  They had actually started loading the 18 wheeler believe it or not. Good movers like the Big T Moving (Alpharetta Location) are flexible and helpful like that.

The next morning they got there at like 8:30/8:45.  They immediately started tagging and loading.  They also finished up the packing and were done by like 3pm!!!  I was able to clean and let them take the vacuum cleaner and they left.  It was definitely a better experience than the move to Seattle.  Those movers were slow. 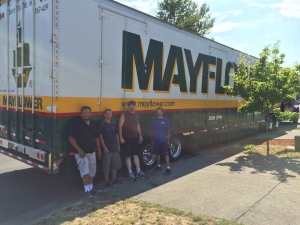 We dropped my husbands car off with friends (for transit pickup in a week).  We finally got to our hotel nearby by 10pm and we got a pretty good nights sleep before we headed out the next morning.  And since this was a vacation as well as a move we were taking it kinda slow in the mornings.  Trying to make sure we were all ready and stuff.

Sunday morning came, we ate the hotel breakfast, loaded the jeep up and we were off for our adventure!! 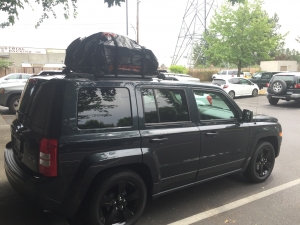 30 days of clothes and necessities!! 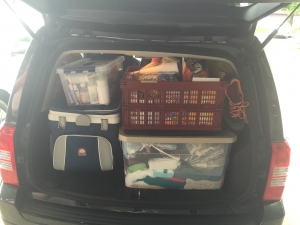 Dog needs, medications, snacks, and of course the ice chest! 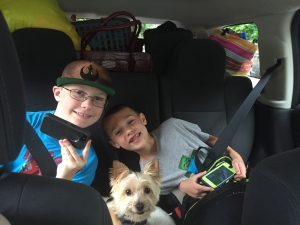 The backseat trio! Btw, I recommend a dog seat belt! That was a lifesaver!